Posted by Neelav Samrat De on July 29, 2015
During World War II, Japan was at the height of its imperialism! The Emperor's words were taken with death seriousness by its large and powerful army. It was during this time, when the Imperial Army was well spread from China in the north to Thailand in the south and Burma in the east.

The tired Japanese army had a good base set-up in Thailand by 1945. Thailand which was also under monarchy was a land of Buddhism and they had no army as such to fight off invaders. The reason behind this introduction is simply because the Japanese army at that time gave orders to its soldiers to satiate their sexual needs on the Thai women. This event set out the sexual freedom of this country and today after more than half a century later, Thailand, as we all know, is a favourite place for men!

Thailand has a burgeoning population and barring Bangkok, most other areas are rural. These rural areas are mired by poverty and the population is primarily poor. The men, are a bunch of alcohol loving, lazy and unambitious lot. So to say, they will not take the lead to feed their families. So then who will do it? Its the women. And how do they do it? Sex.

Today, when one visits Bangkok, the glimpses of the Playboy Lounge & Bar and other night life hotspots of the city will tell you on the face, what they mean to do as business! The Thai women are not beautiful on average, but their skin is what attracts the men of the world! Most bar girls, are from the rural areas and they come to Bangkok to "earn" for the family. These well mannered, soft spoken women, have a distinct feature about them. They do not have the "commercial" tag writ large on their face. They are the only women in the world who will tell you "I love you" after spending 2 hours with you through the evening. That demure smile and the romantic gestures is what makes them stand out. 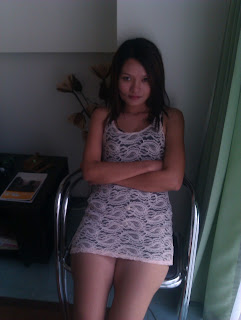 More so, while there is no fear of getting in trouble with the authorities regarding the on-going "trade", its the demeanour of the women that is so attractive. One will surely get a feeling that these girls are there to make money, but will not blatantly show that side of it. So its more like an understanding of sorts, when a bar girl says she loves you and then you enquire about "how much?". And she could say a figure ranging between 1500 to 3000 Baht and then never repeat it. Once the deal is done in a subtle manner, she becomes your girlfriend! 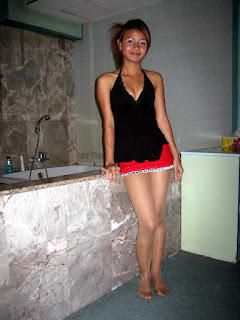 Their poor backgrounds infact, give them a greater attractiveness. Depending on your luck, if you get one of those "innocent" ones to deal with, her simplicity and small happy gestures, will make you get protective about her, to an extent, that you will even try to protect when one of the other tourists starts eyeing her!

Yes!! You are then going around with her! She will accompany you everywhere, even for shopping and meals. Her strong feminine perfume will keep your hunger for her strong and even while you are eating, you mind will be thinking about how she would look like without those tantalising clothes! She will hold your hands and get the mush out of you till you reach the bed! She will mention in her typical Thai accent the sweet nothings . 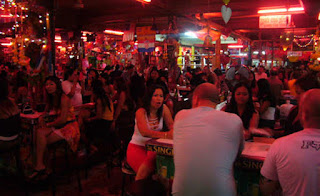 Some white men, who have visited Thailand in the past to have fun, have ended up marrying these girlfriends. And why not? But one thing is for sure. Its an unsaid rule that when you are in Thailand, do not treat these women as prostitutes. Treat them with respect and you will get the best the world has to offer!