The Oriental Extravaganza at Kitchens of Asia!

Posted by rosme on December 14, 2014
Winters beckon festivities, birthdays and weddings which translate into some serious bingeing. Being a health freak I avoid going out to eat during this period but had to accept an invite for a dinner at the insistence of some friends. The place is Kitchens of Asia at Gurgaon’s swankiest cluster of restaurants- The Cyber-hub. It showcases Fusion Japanese or American Japanese cuisine which is more suited to the Indian palate than the authentic version. The Interiors are chic, minimalistic and ooze tranquillity. The red and black palette spells elegance. I caught up with Amit Arora the owner of the place who’s extremely interesting and will also be featuring in another article of mine. He spoke about his fascination for Japanese food which culminated in the birth of KOA. 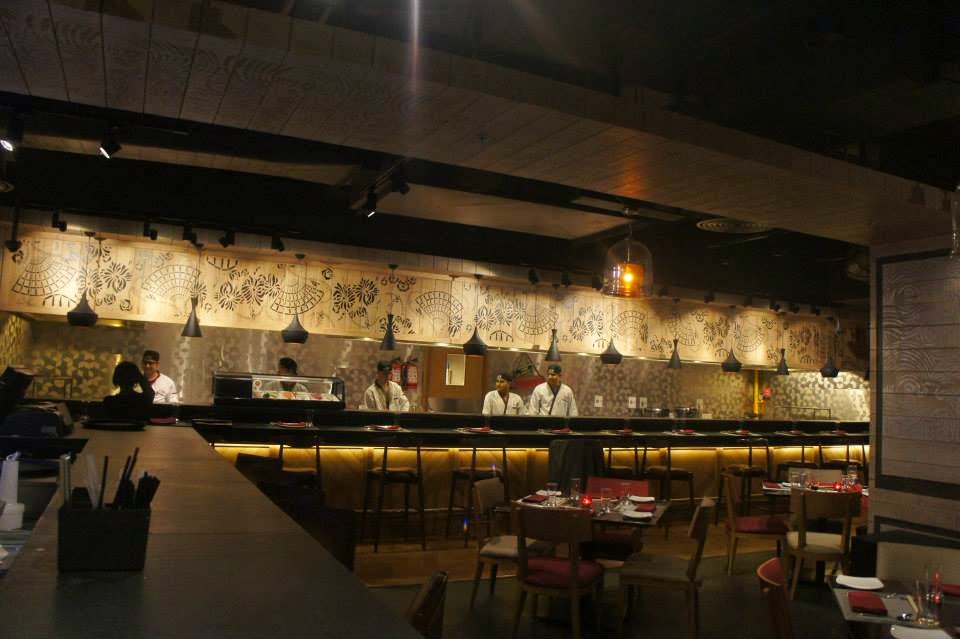 The first mocktail that I tried was the Guavatini, which is an amalgamation of guava juice with lemon juice, some Worcestershire sauce and other ingredients resulting in a sweet and spicy drink. Another mocktail that I recommend is the Sugoi ringo which is jasmine tea flavoured with Indian spices. This one’s served hot and is the perfect accompaniment to a meal in the present weather.
And now, i shall move on to talking about the culinary feast that we partook of that day. We started off with sushis; a no –brainer, I know. 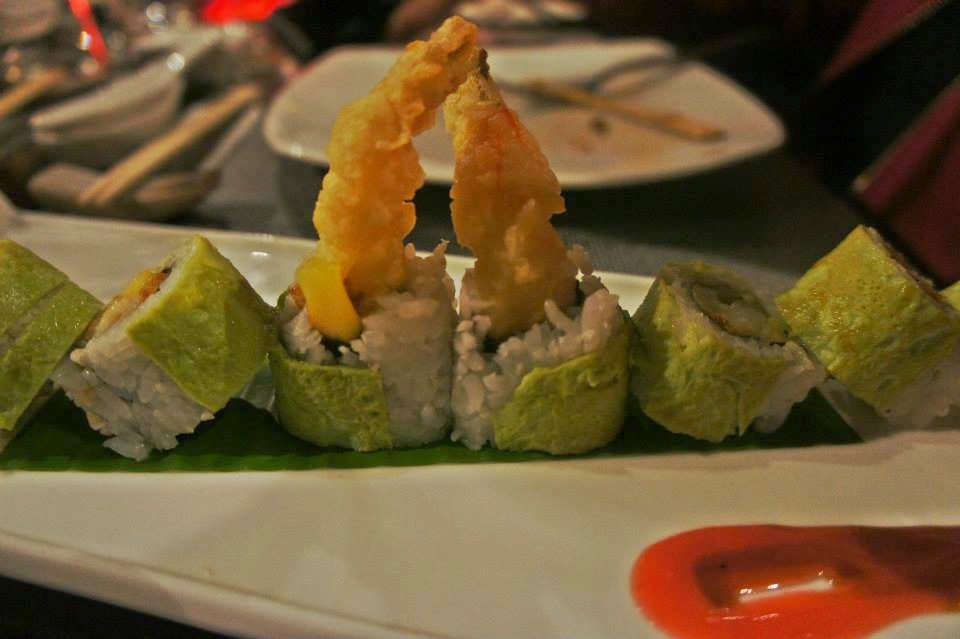 I loved the yasai tempura roll, the crunchiness of tempura adds a burst of flavour. The spicy tuna vied with the salmon roll for the top position in this category. The prawns tempura and fish skewers were polished off with great gusto and in my opinion that proves their yumminess.KOA also incorporates the robotayaki form of cooking in which food items are slow-grilled over hot charcoal. The corn on cob cooked in this manner was delightful. The slightly spicy sauce used on the corn took this simple dish to an altogether different level. I also tried the sweet potato satay but this one can be skipped. Edamame beans arrived, cooked in two different styles. 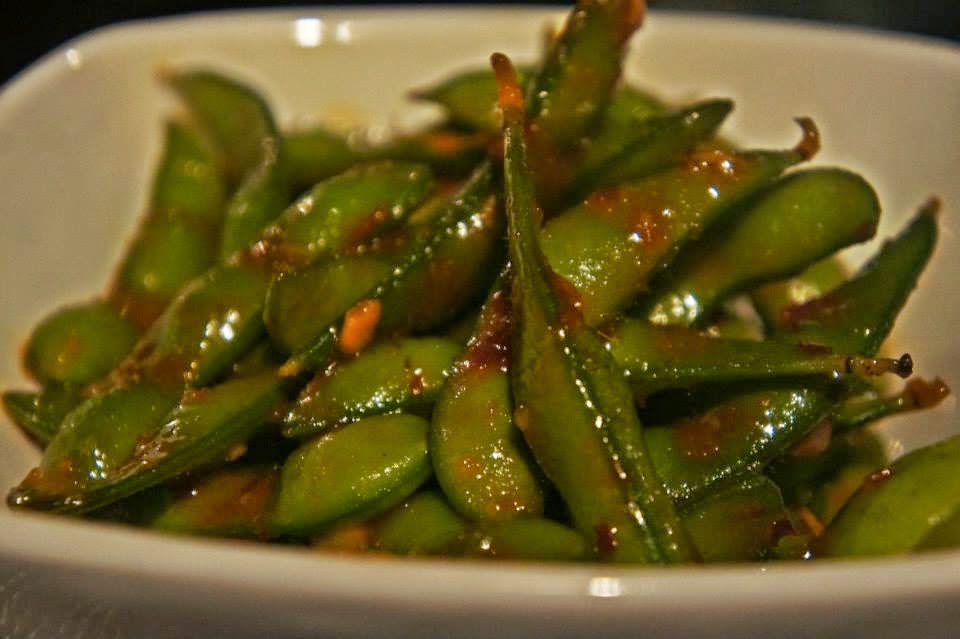 Although the beans cooked in chilly garlic sauce was flavourful, it still is a hassle to suck them out from the covers and in my opinion, this and the potato suteki failed to impress. The salmon steak and the snapper are highly recommended along with the sashimi platter. The squid on the sashimi platter may not be liked by everyone due to its acquired taste, the salmon again impresses with its freshness. The shira ae tofu is crumbled silken tofu with spinach and edamame beans. It is subtly sweet and encompasses different textures; this happens to be my personal favourite. The other dish that will draw me back to KOA is the oriental curry with sticky rice. 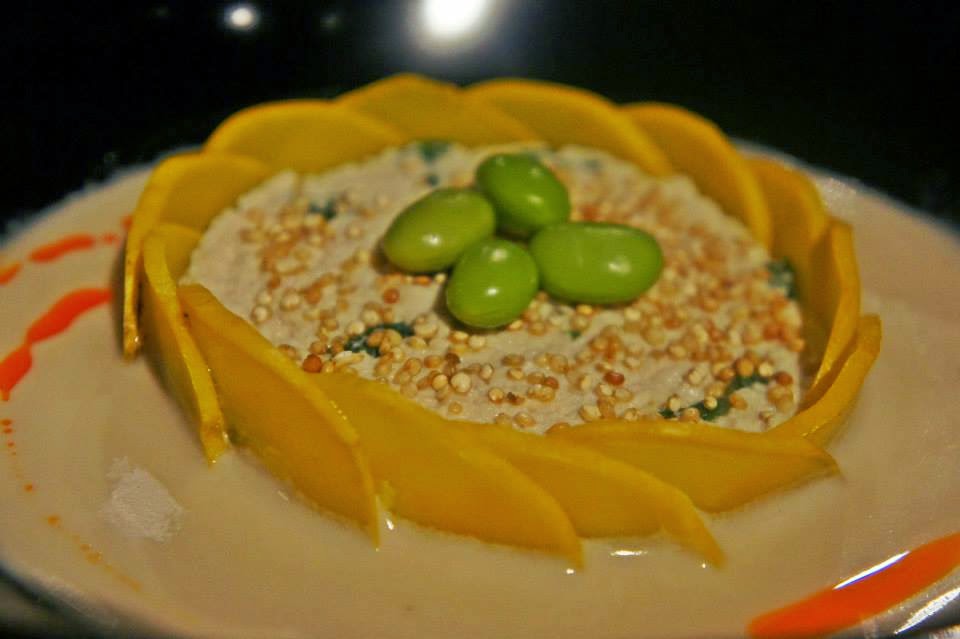 The curry is not made from coconut milk like its Thai cuisine and neither has overpowering flavours a la the Chinese version. It’s fragrant, delicately spiced and creamy; moreover it contains vegetables cooked to perfection. In fact just writing about it makes me crave for some more. The black cod miso had its own patrons and some claimed that this was the piece de resistance of the evening 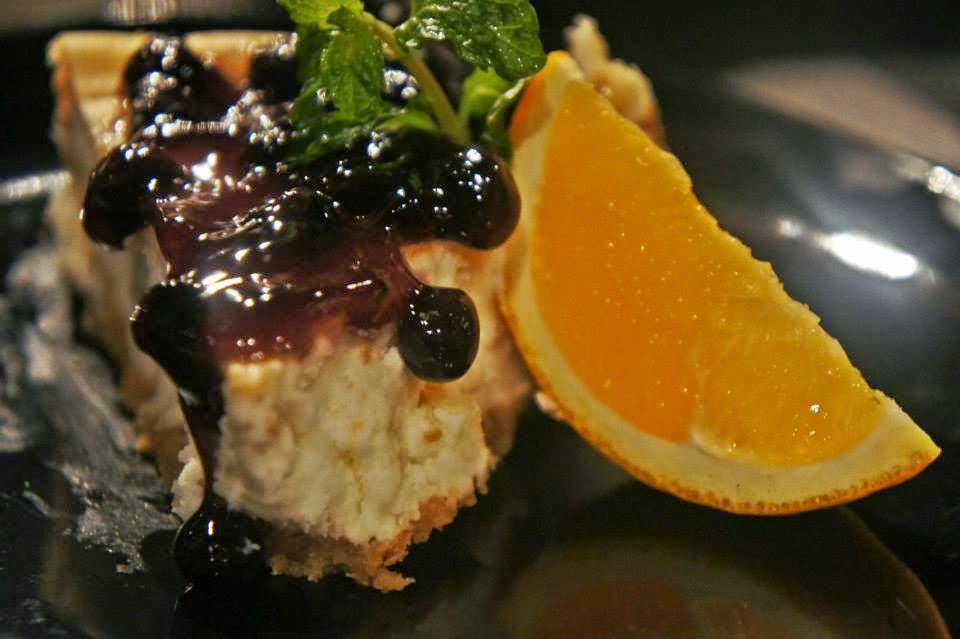 .
We ended this yummy culinary feast with chocolate brownie and blueberry cheesecake. Frankly I was too full to delve into either but the blueberry cheesecake was happily devoured by my friends. Kitchens of Asia has everything going for it, be it the location, the ambience, the service and most importantly the food. Kudos to Amit, Ajay, Sahil and their team for starting on a perfect note.