Celebrate a Delightful Baisakhi Eve at Kingdom of Dreams with Flame5

Posted by rosme on April 08, 2015
~ a band of singers lead by Kanika Kapoor promise an evening of
merriment and music ~ 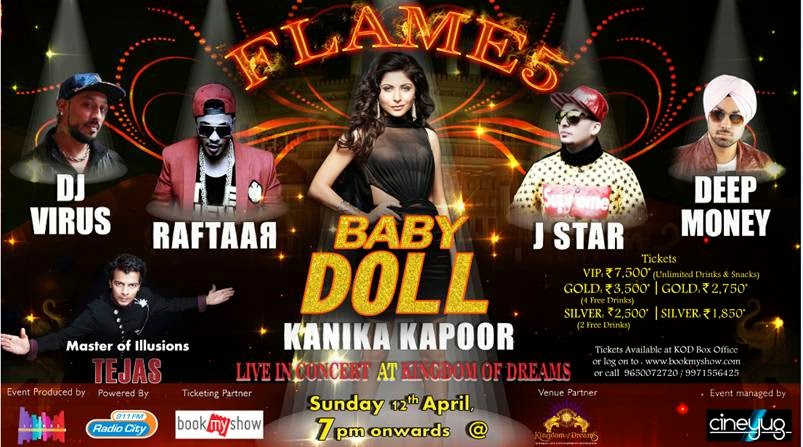 Gurgaon: 6th April 2015: Baisakhi celebrations at Kingdom of Dreams are about to become memorable on the eve of the harvest festival, with Flame5 a concert of singers and musicians who will lend a strong earthy and Punjabi flavour to the musical performances on the 12th of April 2015. Lead by singing superstar Kanika Kapoor the band

of performers will set the stage on fire with a music fest of popular and current Bollywood favourites which will bring the house down and get the audience dancing in abandon to hard core Punjabi and dhol beats. The reigning Bollywood crooner Kanika Kapoor credited with some of the biggest singles like Baby Doll, Lovely – Happy New Year, Kamlee – Happy New yearand Chittiyan Kalaiyaan from Roy will perform her electrifying numbers. The thrilling concert will also feature performances by Raftar of RDB, J Star an emerging singer of Punjabi music industry, Punjabi singer Deep MONEY and DJ Virus! A line up of stellar performers whose performances promise to rouse and thrill the audiences and make for a memorable evening filled with the exuberant joy of the festival of Baisakhi. Kingdom of Dreams, India’s incredible entertainment destination will once again host live entertainment that will bring joy, merriment and enjoyment for its countless visitors and guests on the 12th of April. Tickets for the concert are available at bookmyshow.com and the Kingdom of Dreams Box Office. See You There!!