Luxury at its very best and how it can spoil you

Posted by rosme on April 20, 2015
During a recent stay at the ITC Maurya Sheraton, I was truly impressed with the grandeur and opulence of this trademark hotel in New Delhi. I travel a lot on work and hotels are where I sleep the most. But this particular stay at the Maurya has left an impression on me no doubt. 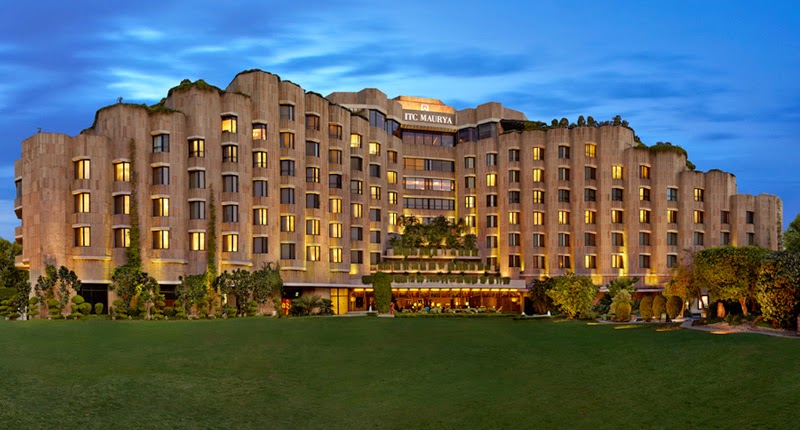 All premium luxury hotels under the aegis of ITC Group are the first on this globe to have received the LEED Platinum certification making them the greenest luxury hotel chain in the world, and that is an achievement by any standards. Truly appreciated since these are trying times for the environment and eco-friendly adoptions of technology to save the environment from further depletion is a must.Even guest feedback is through e-forms!
The Maurya Sheraton’s Bukhara is supposedly the best in churning out the famous Dal Bukhara but I am not even talking of that because even Putin eats it whenever in Delhi! 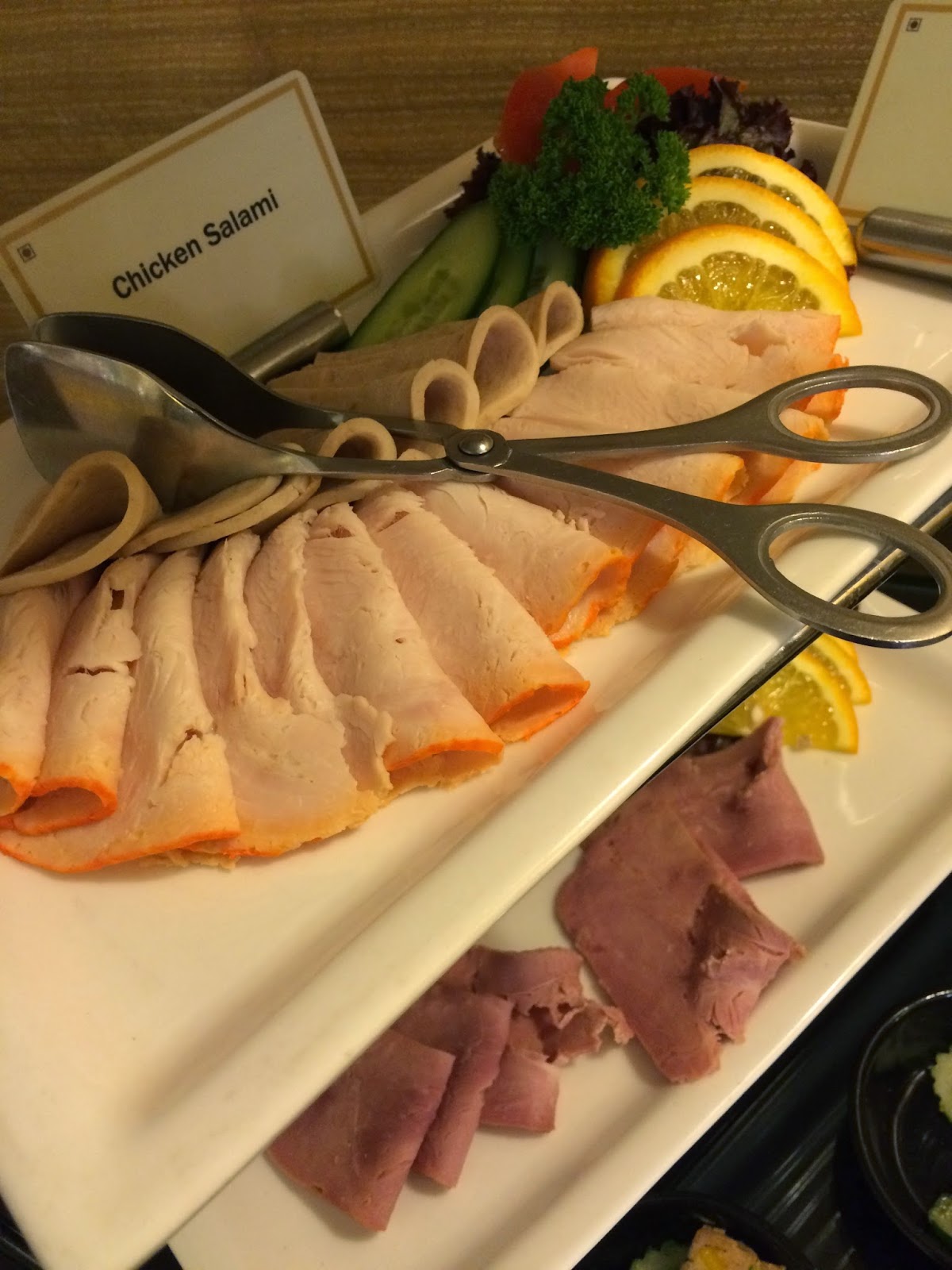 So what makes this hotel tick? The answer lies in its 14th Floor. The famous Grand Presidential Floor which even the hotel admits as being “Like the Mauryan Empire, the only one of its kind”! And I seriously believe that; it is one of its kind! 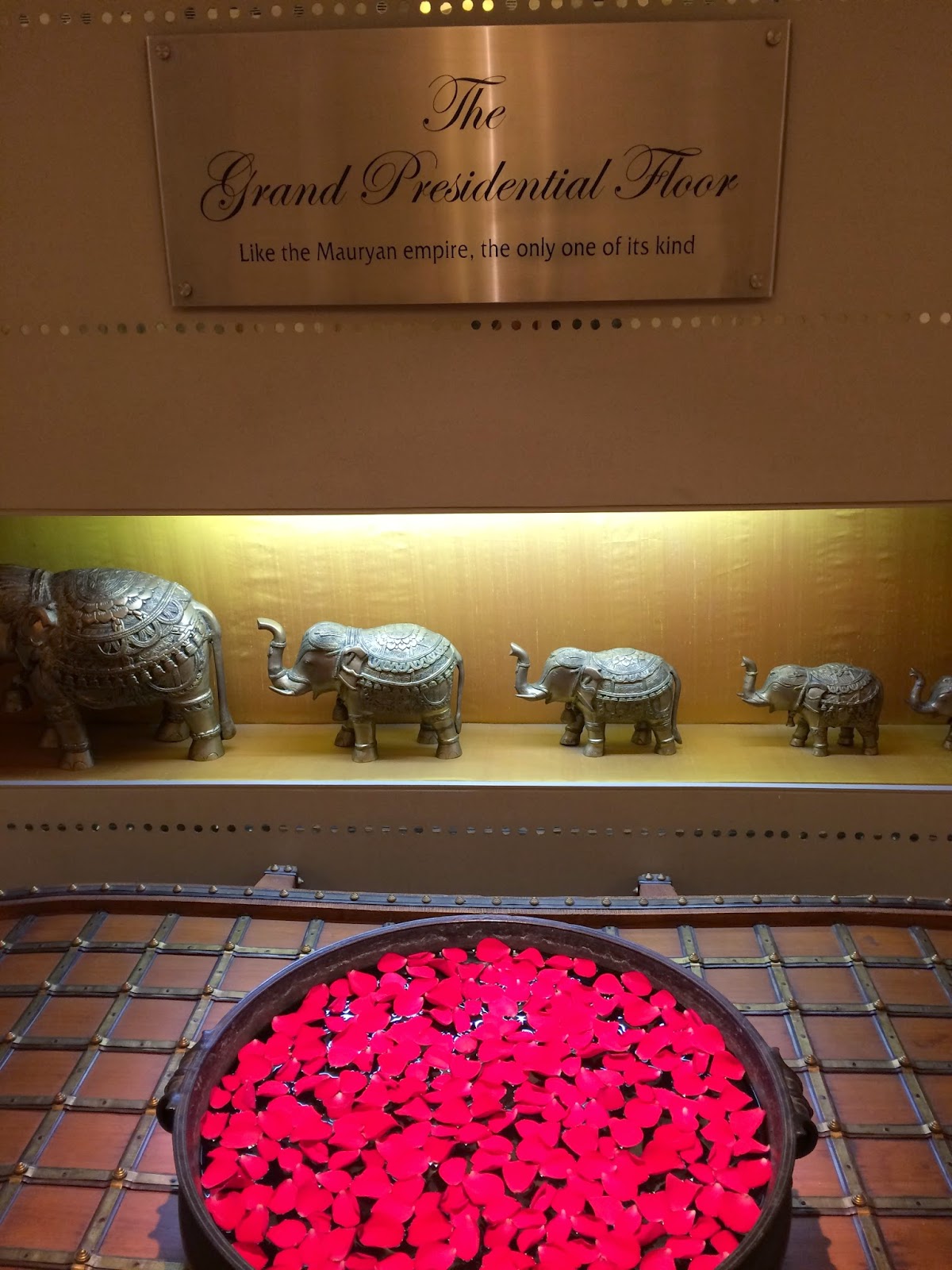 The Grand Presidential floor is where heads of states including Barrack Obama, James Cameroon, Vladimir Putin and the likes stay. The Chanakya Suite is home to these powerful people. And hence the service on this floor is immaculate. Truly world class and out of the world! I have heard from the wall, that, when Potus was to stay here, the entire 14th floor was cleared of everything including the beds! Surveillance systems, communication systems, GPS systems, jammers and the likes that are capable of arming an entire army, had been installed in all the rooms and a makeshift fully functional office was active and running during the entire trip of the President. The Americans made a small White House out of the 14th floor! How interesting that!
The Grand Presidential floor also houses the Summit Lounge, an exclusive lounge for ITC Platinum and Starwood members.
The Summit lounge
This exclusive lounge is a centre for chided pampering! Meant for only in-house guests, the Summit lounge is used for business discussions. But the enthusiastic part is the luxury hour which is from 6pm to 8pm every evening. Children below 10 are not allowed due to excise regulations. But on the brighter side, you get to drink and eat as much as you want to, without notching up a blistering bill. You will be served JW whiskey, Sauvignon wine, the in-famous KF beer along with a load of lip smacking snacks and bites. And a butler in tow to assist!! 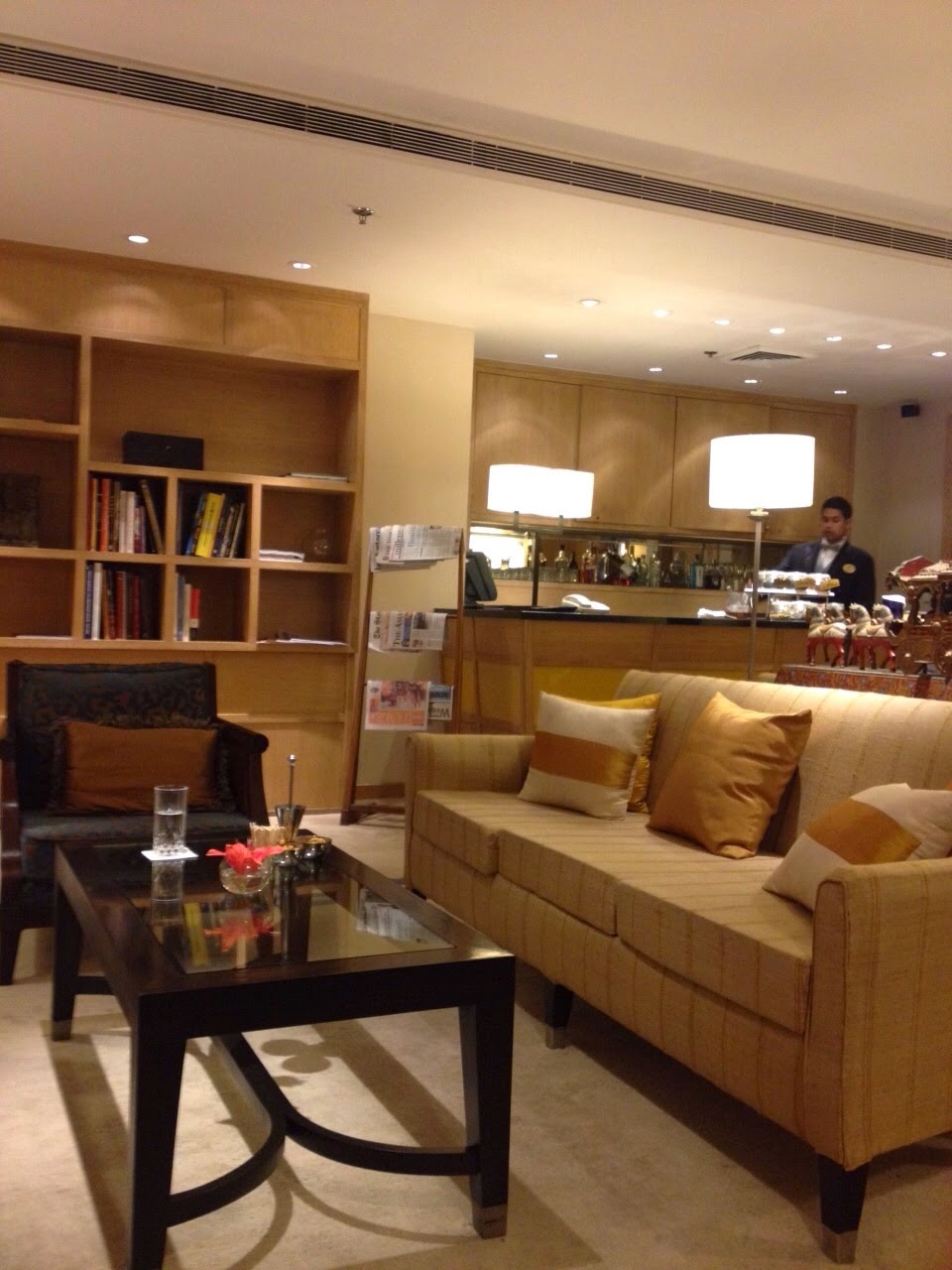 The rooms at the Maurya are elegant and large yet the cosy feeling does reign in on you once you have checked in. Modern to the core, you get to control the lightings, music and television all through an iPad! What’s more, you even get to order in-room dining through the iPad! The hotel believes in digitising processes to reduce paper use and enhance their green concept and they call the iPad the “Digital valet”! 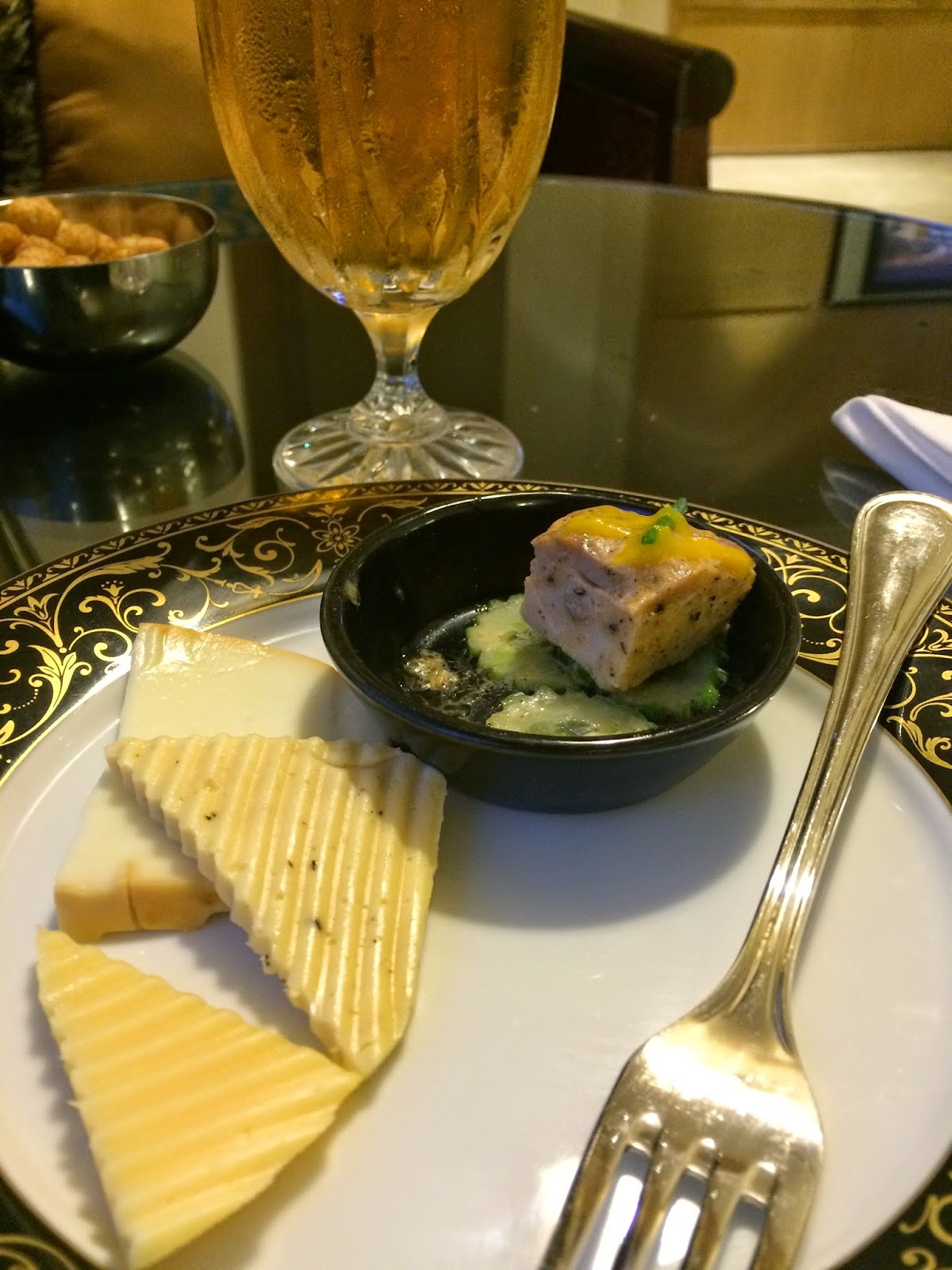 This magnificent hotel has won laurels aplenty. The Bukhara was voted the best restaurant of the Year in 2013, They were the Recipient of the Trip Advisor Certificate of Excellence in 2013, The Environment Champion of the year 2010 by FHRAI, The first hotel in the world to be ‘LEED® Platinum’ certified in the Existing Building category, Chanakya the Grand Presidential Floor was awarded for being one of India’s top 25 Presidential Suites by Travel Advisor. And many more!!
And the best part of it all…I got to stay here and spend a weekend only to be impressed enough to write this piece!
Way to go ITC Maurya Sheraton!

Neelav is  undoubtedly a self acclaimed glut and that's completely attributable to his innocent love for food. No harm done. he's a traveller and this compliments his passion for food. Otherwise, He loves to cook, drink tons of beer and thankfully doesn't drive after that! 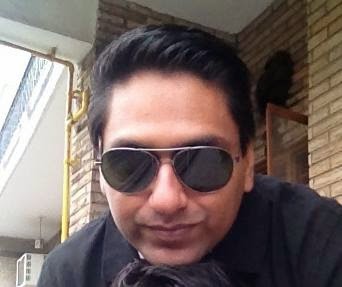