Posted by Neelav Samrat De on July 29, 2015
Probably if the Wright brothers were alive today, they could have taken up consultancy works to find MH 370. The world has forgotten about MH 370 strangely enough. The media is not concerned to carry reports of this “paradox” anymore. But my mind, that is rather intrigued by the anomalies and developments of aviation, is still very inquisitive to know, how a commercial flight can “just disappear” from the face of the globe! And it’s been more than a year now, since the Boeing 777-200 ER has “gone”.

To add to the intrigue, it is first important to know what a Boeing 777 is all about. This aircraft has a twin turbofan engine and cruises at an average speed of 950 km/hour. The aircraft’s wingspan is 61 meters thus making it amongst the widest aircrafts in the world behind the Airbus A-330 and the Airbus A-380. The 777-200 ER is the world's longest-range airliner, able to fly over halfway around the globe. It also holds the record for the longest distance flown non-stop by a commercial liner. The ER stands for extended range.

Going by the design of this aircraft, it is near to impossible for the 777 to see a literal downfall by virtue of its own failure. This aircraft is also the first to have the distinction to be designed completely by a computer program. The aircraft’s aerodynamics and wing profiling which were first designed in 1995, have seen vast transformations since then. The aircraft was improvised over the years and was also among the best in terms of fuel efficiency. Infact, when a new aircraft is built from design to the physical form, several mock-up tests are done for certain parts of the aircraft, where the manufacturer feels, there could be a flaw. In the case of the 777, Boeing was so satisfied with the results that no additional mock-ups were tested. Much goes into saying why the 777-200 is such a safe aircraft!

The fatality rate of the 777-200 involves 13 incidences in total globally. But most of the investigations later revealed that these were human errors and very rarely did the systems give way to a crash.

So on 8th March 2014, when Malaysian Airlines MH 370 took off from KL to go to Beijing, carrying 239 people on board, it disappeared within 1 hour of taking off and has never been seen since! How strange that! How can an aircraft the size of a 777 just disappear from the face of earth? The entire Malay Peninsula and the vast south eastern Indian Ocean was searched, scanned by satellites and sonar technology was used on sub-seabed levels. But nothing was found and nothing has still been found after 1 year and 1 month. How bizarre is that.

There have been 7 other mysterious disappearance of air crafts since the 1940s when the Bermuda Triangle had confused the world with its “magnetic” power. But it’s perhaps the first time that a commercial liner as big as the 777 has zapped the wits of even the best aviation experts.

In January this year, the Malaysian government officially declared the disappearance as an “accident”. Ever since, the International Civil Aviation Association has come up with new standards for commercial flights, in the hope that air crafts pass on their locations to radars every 15 minutes. But how will this help, if a plane was to disappear within a gap of 15 minutes, never to be found again? 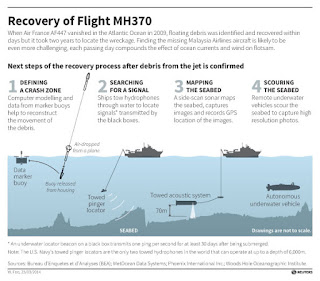 Mysteries surrounding the MH 370 remain a mystery with conspiracy theories doing the rounds. Bizarre theories that have done rounds include the plane being hijacked by aliens or we’ve heard that the plane was hijacked to Pakistan and that the aircraft was hidden in an underground hangar! We have also heard that Vladimir Putin hijacked the plane to Siberia.

However, the most closely matched theory is that of the US drone technology that was in the aircraft and that it had fallen in the hands of the Chinese or Islamic extremists, and that the US “vaporised” the aircraft without leaving any trace. Some even talk of time travellers. And why shouldn’t people talk bizarre, knowing fully well, that MH 370 with 239 people on board is nowhere to be found!

A rescue operation to locate the plane's debris in the Indian Ocean has been going on for months but no trace of the flight has been found so far. I for one, am baffled…..RIP 239
Malaysian Airlines MH 370