Posted by rosme on August 06, 2015
Gurgaon: 1st August 2015: Jhumroo the world’s  biggest and one of the longest running, grand Broadway style Bollywood musical on stage, celebrated non-stop 1000 shows on the 1st of August 2015 at the magnificent Kingdom of Dreams. Launched in the year 2012, Jhumroo, Jhoomo, Nacho Gao, a dazzling theatrical based on the splendid music of the legendary Kishore Kumar has been captivating the audiences with its spellbinding special effects, enjoyable music and a heartwarming love story of a simpleton, madly in love with a beautiful girl and the lengths he goes to win her heart and soul. 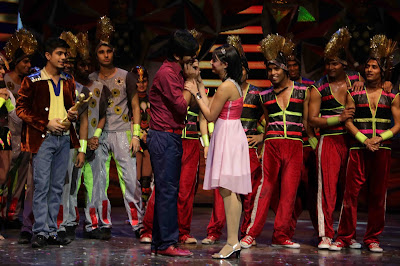 For three continuous years Bhola and Meena the two protagonists of the show have kept the viewers glued to their seats with their madcap moments, highlighted with enthralling special effects and rhythm and melodies of lilting music of the maestro Kishore Kumar; music that is a part of people’s lives and incidentally Jhumroo completes its run of 1000 shows to co-incide with the birthday of the musical genius Kishore da.  Speaking on the occasion, Viraf Sarkari, Director Kingdom of Dreams said, “This milestone is historic for us and the moment has an unbelievably joyous quality. Jhumroo has been a labour of love for all of us and I would like to extend my heartfelt thanks to the cast and crew of the musical who have kept the magic alive with their untiring energy and zeal.  I would also like to thank our countless audience who have come and viewed Jhumroo and demonstrated their love for this genre of entertainment.”
Encouraging the untiring efforts of the team of actors, managers and crew of Jhumroo, Mr. Anumod Gagan Sharma, and Managing Director Kingdom of Dreams said, “Jhumroo’s 1000 non-stop shows is a big moment for all of us at Kingdom of Dreams. The success of the musical leaves me in no doubt that we have the best of teams working with us. It is their dedication that has contributed to the show’s super success. I would also like to say to the viewers Yeh Nahin Dekha toh Kuch Nahin Dekha. You all must come and watch this enthralling show on stage.” 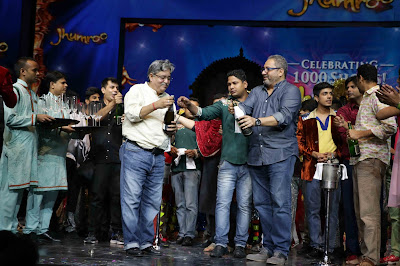 The moment the 1000th show got over the stage was taken over by the jubilant cast and crew along with Director and Producer of the show. To the accompaniment of confetti blast and uncorking of the bubbly the actors and dancers celebrated this much awaited milestone.
The celebrations for the visitors to KOD commence on the 31st of July and culminated this evening on the 1st of August marking the day the musical completed 1000 shows! Kingdom of Dreams had posted super offers to mark the occasion and the viewers logged on to KOD face book, twitter pages to win these exclusive discount offers for the celebrations.  Visitors to Kingdom of Dreams and especially viewers of the show were in for an exciting time with plethora of surprises won by couples during the show! Audience members who sang Kishore Kumar numbers were awarded tickets to the Kingdom of Dreams Bollywood musical. Kingdom of Dreams, India’s incredible destination houses the opulent Nautanki Mahal that hosts the world’s two biggest Bollywood megamusicals, Jhumroo and Zangoora and is the only leisure destination in India for complete live entertainment. Enabled with cutting edge technology the Broadway style musicals on stage weave a spell on the enraptured audience. 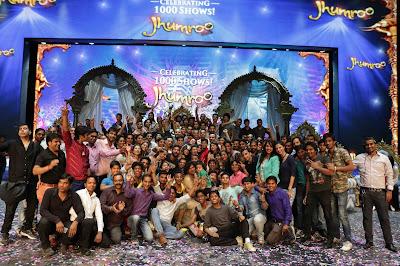