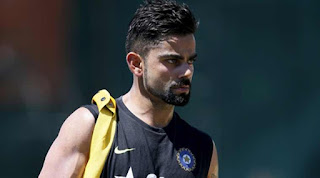 Smaaash, cyberhub welcomed the cricket star virat kohli to its folds. Smaaash is serial entrepreneur Shripal Morakhia’s labour of love. Here guests are presented with an exclusive entertainment venue with an uber cool sports, dining and music experience. The main draw here is the 360 cricket stimulator which has a regular cricket buff facing Dale Steyn, wasim akram and other bowlers, which is designed with the inputs from the great Indian legend and maestro Sachin Tendulkar. After Sachin Tendulkar the brand which believes in achievers decided to introduce Virat as their youth icon.
The rugged sport star spent an afternoon talking about himself and his association with smash. He credited Delhi for imparting him with the fighter instinct that bestows competitiveness and helps draw out his aggressive side on the field. Though he admitted that over time this rash aggression has given way to a more clam and focused channeling his energy. His belief in self is what he owes his success to. Hard-work and persistence keeps him going.
He was very excited about smash. Despite occasionally playing games on the phone and tablet, he’s not addicted to gadgets and urged people to get off the couch and make an effort towards leading an active life. He wants everyone to play more sports and if it’s not possible for some in the harsh sun, then no sweat, Smash comes to the rescue. He was biased towards the cricket stimulator game which he feels is as real as it gets. A lot of research and thought has been put in the simulator by none other than our very own “little master” Sachin Tendulkar himself. The legendary cricketer has verified details like how a particular bowler feels to a batsman, the height and point of ball release and the like. So folks, these simulators are as real as it gets!
Now some news for all the young ladies out there- Virat declared that he was a committed man which had the women in the audience burst into a loud applause. Don’t we all love a guy who’s honest to his lady. He loves changing hairstyles, trying funky ones and thinks he can carry off anything with élan. After duly impressing the media indoors Virat stepped outside to the throngs of junta that had occupied every nook and corner of cyber hub including the three floors, to catch a glimpse of him.
cricket cyberhub gaming delhi Ncr Personalities sachin tendulkar Smaaash Cyber hub stimulator Virat Kohli youth icon