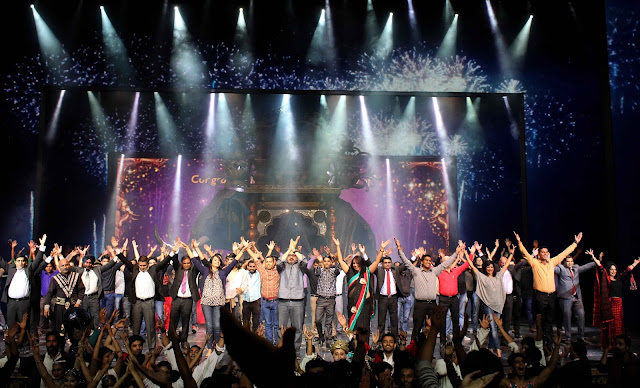 ~ Zangoora the magical show marks historic run of 5 years of non-stop shows~
~ India’s one and only Live Entertainment Destination celebrated 5 years of
glorious success~
Gurgaon: 17th September 2015: Kingdom of Dreams, India’s magnificent and one and only live entertainment destination and Zangoora, The Gypsy Prince the world’s biggest and longest running Bollywood musical on stage celebrated a historic 5 years of non-stop shows and world class entertainment. Launched in September 2010 Zangoora’s magic continues to hold the audiences in thrall with its stupendous special effects, electric energy of the cast and crew, opulent costumes and the 4D cinematic experience.
The exhilaration of the visitors to KOD and the performing cast and crew of Zangoora knew no bounds as all gathered to experience the historic show this afternoon, which marked a run of 5 glorious years of live entertainment on stage in the one and only Bollywood style extravaganza. The Zangoora star cast and dancers with their boundless energy and sheer joi-de-vivre kept the audience spellbound. The breathtaking visual effects and foot-tapping Bollywood music got the viewers out of their seats to dance in the aisles in keeping with the performers on stage. The appreciation and love showered on the performers of Zangoora was instantaneous and fuelled the performers’ zeal even more. 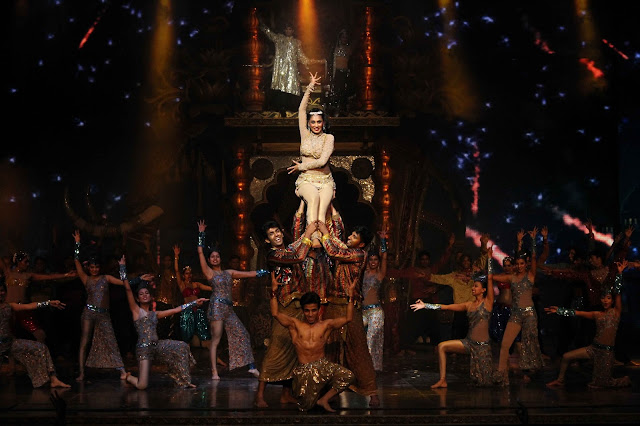 Speaking on the occasion a visibly moved Viraf Sarkari, Director Kingdom of Dreams said, “On this historic occasion, we all feel the most heartwarming emotion for the overwhelming response and applause from audiences across the world. Zangoora is a show that has been worked upon with passion. It has crossed over 1700 shows! For us it is not just a milestone of 5 years…for the entire cast and crew it is akin to work of 50 years of hard work. Zangoora has been the result of thousands of hours of rehearsals, has 200 crew members working on it every day, is filled with 20 fabulous songs and dances and breathtaking special effects. To perform with the same energy and zeal for 5 years of non-stop shows is a feat which is not easy to accomplish and this occasion

is a big milestone for us. It is all for just one very special passion: our audience. I would like to thank everyone for making Zangoora a success. Yeh nahin dekha toh kuchch nahi dekha!”
An elated Mr. Anumod Gagan Sharma said, “It was our dream and desire to create a destination like Kingdom of Dreams for India to showcase its rich culture and heritage. Zangoora, The Gypsy Prince has been an integral part of KOD to showcase the contemporary Indian performing arts which includes Bollywood style music and dancing. Zangoora is an extravaganza which has completed a dream run of 5 years of non-stop shows and Kingdom of Dreams as a complete family entertainment destination. I would like to congratulate all the teams who have worked hard each day to make this milestone happen. I would like to extend my best wishes and prayers for KOD and Zangoora to cross many more such milestones and continue to create history.”
Kingdom of Dreams and Zangoora have been experienced and felicitated by many an Industry Czar, Bollywood Superstars, Business Honchos as well as the masses. Travellers from far and wide, domestic as well as International have all been left mesmerised by the sheer magical artistry of the place as well as the stupendous visual feast of the World’s most spectacular Bollywood musicals on stage. A Must See and a Must Visit destination Kingdom of Dreams continues to create magic and mystery for throngs of visitors. Yeh Nahin Dekha Toh Kuchch Nahin Dekha!