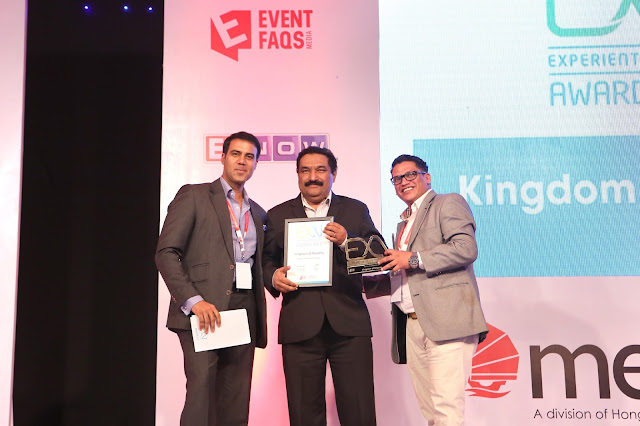 Kingdom of Dreams, India’s one and only live entertainment destination has been conferred upon the Best Non-Traditional Venue Award by the recently concluded 7th edition of MaxiMICE Conclave & Awards 2015 at the Trident BKC, Mumbai on October 15. The first-of-its-kind initiative by EVENTFAQS Media the awards had been organized to recognize and celebrate those venues that support the ever-growing appetite of the Indian MICE industry.
The MaxiMICE conclave was followed by the inaugural edition of MaxiMICE Experiential Venues Awards presented by MEHK. KPMG were the independent process validators, while the jury comprised of over 20 top senior professionals from leading organisations in the MICE industry. This included members of EEMA–NEC; MICE agencies; Incentive Houses; Professional Congress Organisations and Destination Management Companies.
Since its inception in the year 2010 Kingdom of Dreams has been successful in hosting events of national and International significance with an excellence that has exceeded the expectations of clients. Located at the apex of the Golden triangle, more than just strategic, Kingdom of dreams is a perfect and ideal venue for attracting MICE traffic. The property situated in the heart of Gurgaon is surrounded by an inventory of approx 1550 rooms within a radius of 1km. Further on in a radius of 10 kms, various 3star to 5star hotels offer an inventory of over 10,000 rooms,
hence rendering Kingdom of Dreams an ideal venue for hosting both small and large events ranging anywhere between 10 to 3000pax.
The property offers itself as a unique venue for convention lunches and dinners. With its architecture, design, arts and crafts elements it is a unique reflection of India and has a vast variety of cuisines from across the country. These delightful components render it an ideal venue for product launches, award nights, and celebratory events. In the past 5 years KOD has hosted more than 5000 events ranging between 50 till 3000pax. Few big names would be UHG, F1 awards, GMR, Top Gear awards, Lonely Planet, Afghan Telecom, ATN awards, YPO, Asia Spa awards, Jaffra USA, IFFA awards, Bacardi, Ranbaxy, Power Brands, GIMA, NDTV Gadget Guru, EEMA, Microsoft, Bank of America, Ericsson, Heromoto Corp. etc. Product launches such as Sony, Samsung, LG, Chevrolet, Yamaha, Datsun, Hitachi, Kohler, Hyundai, Adidas, Bacardi Untamable, etc are few names; the most recent being the launch of Samsung Z3 (tizen OS launch).
Speaking on the occasion a visibly excited Viraf Sarkari, Director Kingdom of Dreams said, “This is indeed a proud moment for us. Kingdom of Dreams is a dynamic venue, where we receive varied requests as every client wants their arrangements done in their own special way. Being a unique venue with a flexibility and capacity of hosting anywhere from 50 to over 3000pax and equipped with features such as built-in hydraulic stage, performer flying systems, LED screens, LED arches and host of ultra-modern facilities and services, we can make a difference by offering in-house technical and gadgetry support which a client is unlikely to find anywhere else in India.”
Specific features of Kingdom of Dreams venues are:
v Nautanki Mahal is the most hi-tech auditorium in India with larger than life Indian and international Broadway like theatrical productions being staged here. The auditorium holds a hydraulic stage, automated fly bars, and a state-of-the-art matrix sound system that makes the theater experience absolutely real.
v Culture Gully is an air-conditioned boulevard spread across 100,000 square feet with theme restaurants and live kitchens from 14 states of India, represented in full grandeur with their representative architecture and decor. Walking through Culture Gully under a spellbinding sky dome, ornate architecture, tasting the many specialties of the various Indian states is a gourmet’s delight

v Showshaa Theatre: A first of its kind and a unique concept in the country ShowShaa can be a 250 seat auditorium in the day for corporate functions. On the touch of a button its automatic recessing seats can transform it into a banquet hall in the evening for social functions and a glitzy high energy night club on the weekends. Armed to the T with a 60 by 40 ft stage, complete with revolves, hydraulic stage lifts, fly bars, Kirby flying systems, state of the art light effects and live size LED
press release