Last leg of our trip had us  excited about finally exploring the magnificent PangongTso which eluded us eleven years back. Happily we started off on our well planned single day trip to the iconic beauty .  Within a couple of hours we were greeted by fresh snowfall on the climb to Chang La (pass). It was beautiful and I was happily frolicking in the snow hoping that it will stop pretty soon. This snowfall though was a driver’s nightmare and soon  led to a roadblock with vehicles skidding on the road. Our driver Lopsang tried his best to drudge ahead by digging out soil and spreading that on the road to facilitate the movement of the vehicle .Some others pulled out the chains and used that on the tyres to manoeuvre on snow covered roads. It did work for some time and we were hopeful that the snowfall would stop, not that we had any option. However after a couple of hours of trying unsuccessfully to move, our driver began to give up like many others. The vehicles kept skidding and it appeared unsafe to move. Most vehicles started turning around and this was a very logical thing to do since we had not covered even 1/3rd of our journey. 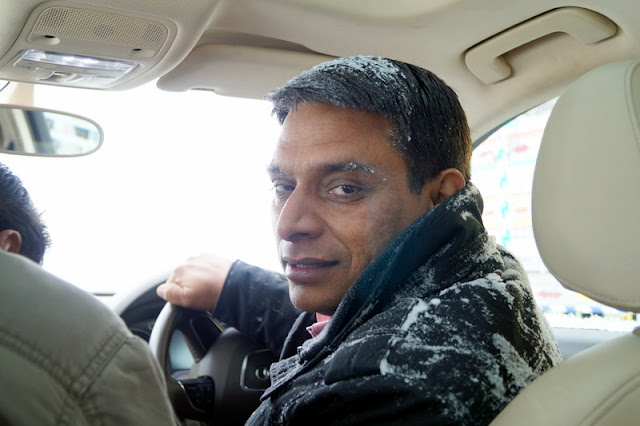 This was my 2nd visit to Ladakh and I didn’t want to miss PangongTso again. I just had to see it this time. An approaching 4 by 4 SUV (Audi Q3) seemed like the kind of vehicle which would be able to cross any terrain and to my husband’s extreme discomfiture I asked for a lift. Luckily at the time they also wished to return to Leh the same night and agreed to take us along. Thus we hopped in the vehicle with 3 strangers from the capital city who had been friends with each other for 35 years. Isn’t that amazing? The journey began .We reached Changla Pass (by some accounts 5360 m above sea level and arguably the third highest drivable pass in Ladakh)amid freezing temperatures. We were faced with a huge snowstorm.  An avalanche blocked the road , But these guys were not the ones to give up “Himmat-E-mardan, madad-E-khuda” was what N said to M and M whose car was blocked by a snow-dozer sans operator, decided to take matters in his hands. He got into it, keyed in and cleared the path for our ride to move ahead.  Soon, the actual dozer operator arrived and was cross at our friend for using his dozer without permission. With a delay of a couple of hours, we were on our way courtesy the Border Roads Organisation. There were still another couple of blocks and returning to Leh that same night seemed impossible. The company’s enthusiasm rubbed on us and we thought what the heck, let’s finish what we started and continued.The jam worsened because of vehicles returning to Leh along the narrow passage and everybody jostling to pass instead of queuing up . 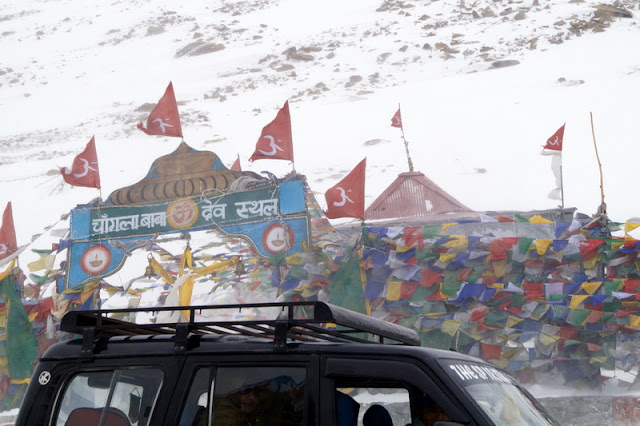 There’s only one café at Chang La and that was bursting at the seams with people. The strong winds lashed the door which could not be shut and the place was icy cold. The only things available there were maggi and chai. We quickly finished our tea and rushed to the comfort of the car. Once downhill the landscape began to transform. From snow clad mountains  to huge rocks and gravelly road, it was such a welcome change, however all that driving coupled with the weather and altitude did give some of us nausea and headache. 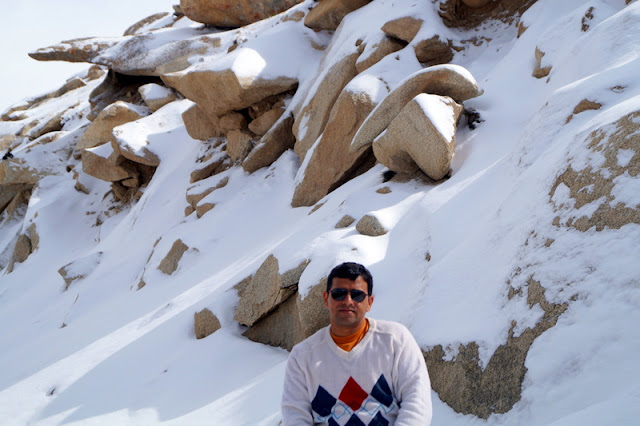 We managed to reach PangongTso just after twilight and yet the view was something! We discovered that we were the only ones who successfully journeyed that day. We chose the home stay option and M despite having driven for over 13 hours and fighting a nasty headache wanted to cook dal for us. I was left in awe. The homeowners were very helpful and even offered to lend me clothes since it was an unplanned halt and I didn’t have any change. The lady of the house made some amazing kali dal, sabzi and rotis for us which tasted ambrosial that night. Exhausted we crashed in our beds.