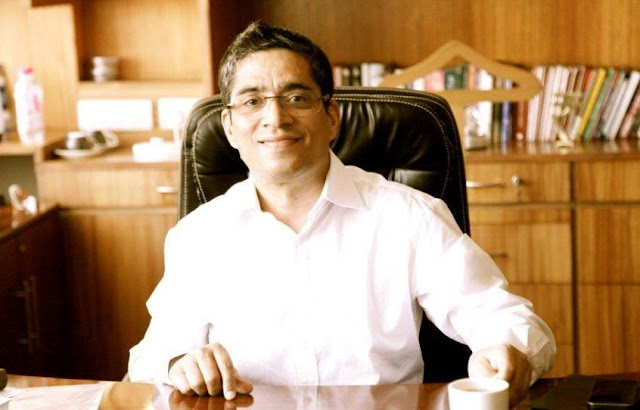 I was to meet a man who became a success in the manufacturing arena way before ‘Make in India’ was even conceived. Not only was this brand a market leader in its industry, they didn’t even let the Chinese enter the segment. Even though the gentleman did not have a tech background, he went on to create a company whose backbone is technology, which has over a 100 patents to its credit and is now the biggest inverter brand in India- Su-Kam. Yes I am talking about the Founder and MD of Su-Kam Mr Kunwer Sachdev.
I was surprised to find this legendary entrepreneur casually dressed in a blue t-shirt and jeans. Yet the word I’d use to describe his appearance is- immaculate! Whether it was the appearance or the measured words, there’s something about his aura that almost made time stand still. Though Mr Sachdev is approachable and easy to talk to , he is also  awe-inspiring at the same time.
The one thing that stands out about him is his eternal optimism which is almost infectious. But that’s not to say that the man takes anything lightly- be it his company or his hobbies- everything in life is done with complete dedication. At Su-Kam they believe in making mistakes and learning from them. Also, I am sure our readers would find this fascinating entrepreneur’s indulging in diverse interests truly fascinating- they range from reading (there’s quite a collection at the office) to playing the piano,  from the daily swim and running marathons  to being a yoga-fanatic. Yeah, can you imagine!
While there are many firsts to Su-Kam’s credit, it is not limited to products. Mr Sachdev pioneered the trend of displaying  sign boards on Dhabas and actually got paid for doing that. The company has now expanded rapidly and offers more than 250 products across the globe. From making inverters, the vision is to move towards total energy solutions, for which he has a very well -articulated vision. Su-Kam has forayed into solar energy related products over the last decade and wants to take solar to every rooftop of every household in India. One gets a glimpse of his business acumen when he says, “the biggest problem with solar inverters is that the installer is clueless about the product and so is the after sales service guy-and that’s where Su-Kam comes in.” True to its name, this company does good work and makes your life better- hence Su-Kam. Another testimony to Mr S’s business sense is Su-Kam’s initial foray into the solar business- they only sold internationally! Now they sell in 70 countries.
Mr Sachdev is media friendly , particularly social media; Su-Kam products are featured on You-tube and the company has a considerable social media footprint including Facebook, Twitter and the like. One shouldn’t let one’s lack of certain exposure- in this case tech education- come in the way of one’s plans. In this case it is keeping-up with the latest technology in the energy sector, thinking ahead of one’s time and using various technology tools for branding and marketing- using blogs and videos to disseminate information about the company and its products. It was his  idea to uses you-tube videos for marketing and he personally oversees the management of the company’s social media profile. This entrepreneur is a strategist unparelleled !
Another testimony to Su-Kam’s long term vision is the fact that it takes pride in the fact many people trained in Su-Kam -personally by Mr Sachdev are flourishing in the industry. It was fascinating to hear that when he would train his sales-force they’d party together till after midnight and he’d still wake them up at 5 am for a session of yoga. Like a true leader, the MD believes in creating a culture and teaching by doing. And what’s more- he still believes he’s learning every day. Now that’s a truly accomplished person.
On a philosophical note- he does believe in destiny but that it can only be achieved with hard-work and perseverance. He’s  committed to working continuously towards better products and energy solutions.


Being an optimist Kunwer Sachdev is sure about a great future for the country and feels that the Modi government is going the right way with its ‘Make in India’, ‘Skill India’ and ‘Entrepreneurship’ push. According to him, it is the first time that a PM is talking about this (something Su-Kam has been doing all along). It is also a great that so many people have faith in a PM- so we’re sure to surge ahead into the future. Amen to that!
Pic Courtesy- Kunwersachdev.com
Kunwer Sachdeva Sukam