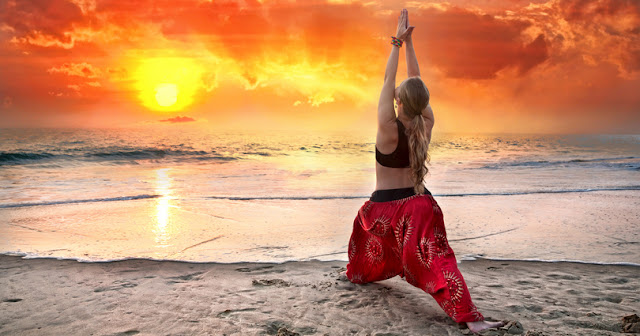 Surya Namaskar, or Sun Salutations, is a group of 12 asanas.
Sun is the life source of our planet. Whatever we may eat, drink or breath it has an element of sun in it. Isn't it then natural that we should be able to digest the "sun" element better? The sun symbolizes spiritual consciousness.
Surya namaskar is a complete sadhana( spiritual practise) in itself, for it includes asanas, pranayama,mantra, and meditation techniques.It has a direct vitalizing effect on the solar energy of the body which flows through the pingala nadi. Regular practice of surya namaskar regulates Pingla nadi whether it is under active or over active. Regulation of this nadi in turn, leads to a balanced energy system both at the mental and physical levels.
Surya namaskar is a complete workout for our physical body, that too without any equipment. It takes the physical body to a point where it is no longer a hurdle but a stepping stone to blossom into our ultimate possibilties.
Below is the description of the 12 postures:

1. Pranamasna(prayer pose)
Stand in upright position with feet together.Keep the eyes closed.Bend the elbows and place the palms together in front of the chest in namaskar mudra. Offer homage to sun, the source of all the life and chant the mantra Om Mitraya namaha( salutation to the friend of all).
2. Hasta Utthanasana( raised arm pose)
Separate the hands.raise and stretch both the arms above the head. Inhale and swing back bending the head, arms and upper body. Om ravaye Namaha( salutation to the shining one)
3. Padahastasana(forward bending head to feet pose)
Exhale and bend forward swinging both the arms downward. Bend from the hips until the fingers or the palms touch the floor on either side of the feet. Bring the forehead as close to the knee as comfortable. Do not over stretch. keep the knees straight. Om Suryaya Namaha(Salutations to the one who induces activity).
4. Ashwa Sanchalanasana(equestrian pose)
Inhale and stretch the right leg back as far as comfortable and hold the mat with the toes. Beginners can touch the knee to the floor. At the same time bend the left knee , keeping the left foot on the floor in the same position. Keep the arms straight.The weight of the body is supported on both the hands, the left foot, the right knee and toes of the right foot. The head should be tilted backward and the back is arched. Om Bhanave Namaha(salutation to the one who illumines)
5. Parvatasana(mountain pose)
Keeping the hands and right foot still, exhale and bring the left foot back next to the right foot. Simultaneously, raise the hips and swing the head lower between the arms, so that the back and the legs form two sides of the triangle. In the final position the legs and the arms straighten and both the heels come down on the floor. Try to bring the head as close to the floor as possible. Om Khagaya Namaha( salutation to the one who moves swiftly in the sky)
6. Ashtanga Namaskara(Eight limbed salutation)
Keep the hands and feet in place. Holding the breath lower the knees, chest and chin to the floor with feet pointing in. Try to bring all the three together on the floor. The hips, stomach and forehead should be raised. Om Pushne Namaha(Salutations to the giver of strength)
7. Bhujangasana(Cobra pose)
Keep the hands and feet in place. Inhale and slide the chest forward, raise first the head, the shoulders, then the elbows( keep the elbows slightly bent at the waist) and arch back into cobra pose. The hips should be lowered to the floor. swing the head back and look up. Om Hiranya Garbhaya namaha(salutation to the golden cosmic self)
8. Parvatasna( mountain pose)
The hands and feet remain as in position 7. Exhale and raise the buttocks and hips. Keep the arms and legs straight and grip the floor with the toes. Om Marichaye namah( salutations to the lord of the dawn).
9. Ashwa sanchalan asana( Eqestrian pose)
Keep the palms flat on the floor and right foot in place.Inhale, bend the left leg and bring the left foot in the front between the hands. simultaneously lower the right knee touching the floor with it and push the pelvis forward. Tilt the head backward and arch the back. Om Adityaya Namaha(Salutation to the son of Aditi).
10.Padahasthasana( hand to foot pose)
Exhale and bring the right foot forward next to the left foot.Straighten both legs.Bring the forehead as close to the knees as possible. Om Savitre namaha( salutation to the Lord of creation).
11. Hasta Utthanasana( raised arm Pose)
Keep the arms and spine in straight line.Inhale and raise the chest and stretch out arms above the head.Keep the arms separated shoulder width apart.Bend backwards the head, arms and upper body . Om Arkaya Namaha(Salutation to the one who is fit to be praised)
12.Pranamasana( Prayer pose)
Exhale and stand straight with hand in front of the chest and palms together in namaskara pose. Om Bhaskarya Namaha(Salutation to the one who leads to enlightenment.)
Contra indications:
People with back problems should not bend fully whether forward or backward.
The semi inverted asanas should not be practiced by people suffering from high BP, coronary artery disease, hernia or intestinal TB.
During pregnancy, practice with care until the begining of the 12th week. 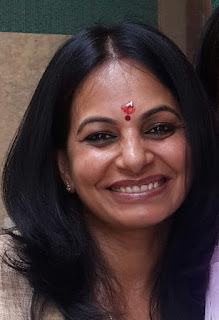 Sumita is a yoga enthusiast. She firmly believes that each child is a born yogi.Has been practising yoga for the last 5-6 years in Bangalore and Gurgaon . she quit working once her daughter was born. Now she enjoys motherhood along with pursuing hobbies like light music,reading and cooking and of course doing  yoga.
Settled in  Gurgaon for the last 3 years,