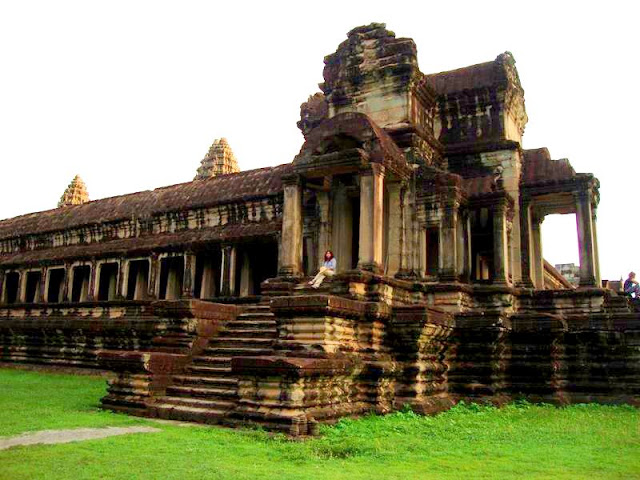 When Kulottunga I, the Chola king, was constructing or enlarging the famous Shiva Temple at Chidambaram (Tamil Nadu), Suryavarman II, the king of Cambodia and the builder of Angkor Wat, offered to send, all the way from Cambodia, a block of stone as a gift for the new construction.
-An Article in The Hindu, 2009

When one goes to a trip which is planned in great detail by one’s wife (this even sponsored by her), one just want to enjoy the experience without particular expectations or trying to be critical. But when our default Bangkok trip got converted to Cambodia I was more than enthusiastic to see the famed Angkor Wat temples. Now I had read all about how they are the biggest religious monuments in the world and everything, but the trip to this land- which during my growing years was more famous for the Khmer Rouge- was much better than what I could ever imagine.
As usual, I had checked the weather before travelling and was aware that this was the off season and also there was the likelihood of showers but we just marched on high on optimism- even the flight to Siem Reap from Bangkok being delayed due to rains did not deter us.
While November to March is the preferred season due to it being dry and the weather colder, we found it to be fairly pleasant in the end of June and thankfully it rained very little. Also the heat factor is more for European tourists and not Indians as we are used to a tropical climate (you spent the whole summer in air conditioning- too bad!). I found it to be rather pleasant after the scorching heat of Gurgaon. 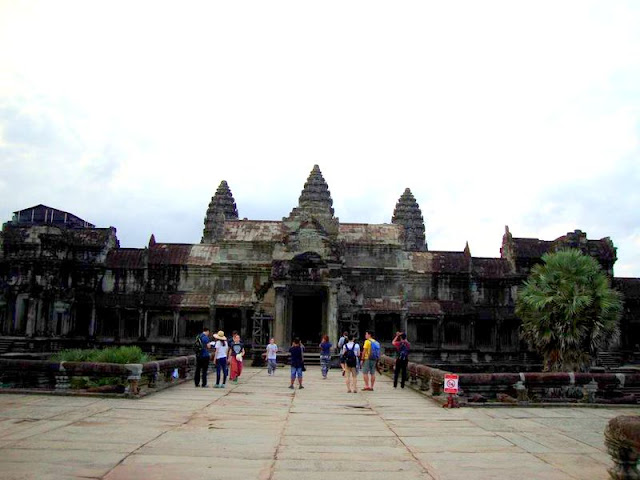 There are many advantages of going to a major tourist destination in the off season and we capitalise on all of them. Lesser crowds everywhere, cheaper hotels, lower transport expenses & a much more pleasant experience in the town itself to name a few. We stayed at a Trip Advisor awarded boutique hotel- it had a great room and a nice pool and the most courteous and helpful staff- all this without burning a hole in the pocket.
The people were friendly and we got the famed tuk-tuk for our sightseeing on day one. We had to make the mandatory trip to the place where you buy the ticket- something which you’ll have to plan. We knew of the hack that if you buy your ticket at 5 pm you can go check out the sunset that day for free, but the timings didn’t suit us. Since my better half had found someone with a detailed itinerary which looked very efficient, we just went with it. I am tempted to start with the wonderful day 2 which was the epitome of this leg of our vacation and involved being outdoors from before sunrise until after sunset. 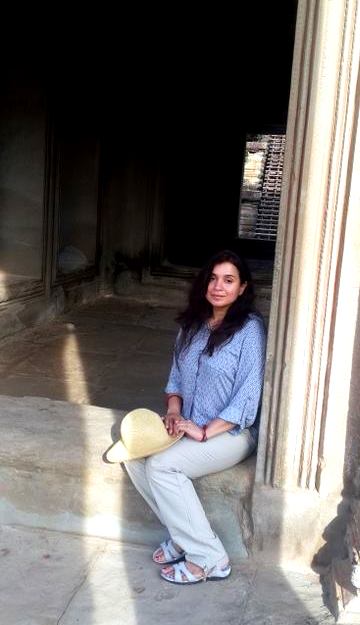 Our pre-booked tuk-tuk arrived near the hotel and we carried on to the Angkor Wat temples, reaching there about 45 mins before sunrise and 15 minutes before first light. As we walked along the outer moat of the Angkor Wat- it was a beautiful sight with the outer temple structure reflecting on the water. We made our way in to be able to see the sunrise from the temple (or the temples at the time of sunrise). We took care to follow the dress code for the temples as the authorities are strict here.

As one crosses the path over the moat to the main temple, the experience is almost surreal. The path had the remnants of the stone Naga railings ubiquitous at most temples around here. The path lead to the large gate which is was the entry to the main temple complex. This moment when you enter the main temple complex is actually one of the most defining moments of the visit. It is not that other temple complexes are not fascinating or some even better than this. But this is the grandest of religious monuments- a true wonder of the ancient world. A building to be standing tall since the 1100s, its structure spanning the area of about 11 football fields, with the tallest central structure just a little short of Qutub Minar. The entire complex is filled with various substructures with intricate work and amazing details. 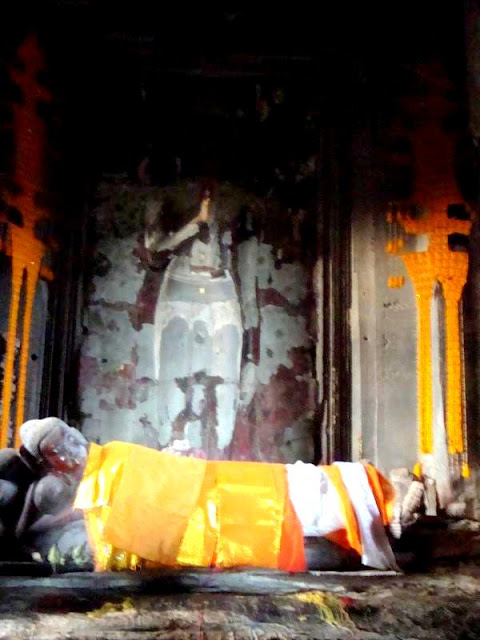 The temple is actually a Vishnu temple which has later been converted into a Buddhist temple. The locals are largely ignorant about the similarities and closeness among these faiths and explain to the western tourists that the two faiths are entirely different. Actually, some segments believe that Gautam Buddha was an avatar of Vishnu. Irrespective of the faith aspects the magnitude of the monument is simply awe-inspiring. The structure is so beautifully constructed that experts say the error in height from one end to the other is less than 0.1%. No wonder that some people believe that these temples were constructed by the gods themselves. It is difficult to imagine someone architecturally so advanced so many centuries back. 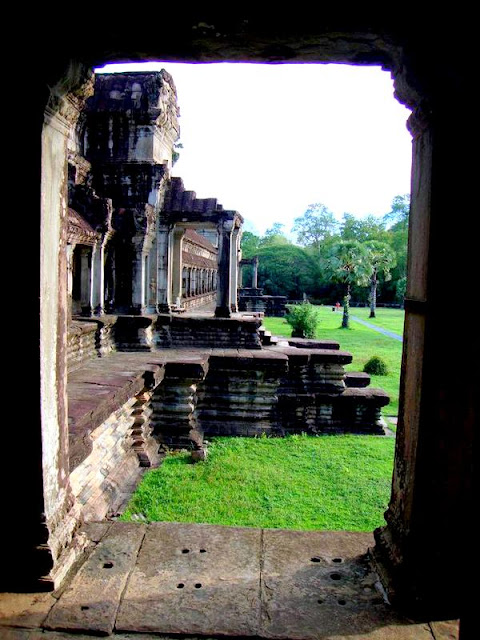 Suggest taking time to explore this monument. One has to wait till the uppermost terrace or ‘Bakan’ opens, which can be reached only through a particular direction from where entry is permitted. It takes a good 45 mins to go through just this terrace. There are many intricate relief carvings, statues and pillars. The Buddha statue outside the sanctum sanctorum (now sealed) is still worshiped and one can see the colourful offerings and decor. In the background of the temple it seems like the one coloured object in an otherwise black and white photograph. One can only imagine what these temples would have been like in their glory days with all the colour and décor- particularly the gilded peaks on the temple roofs. They are very impressive even after so many centuries.
A word about the sanctum sanctorum would be in order. Some articles refer to the influence of Cholas and Pallavas in Cambodia (actually the entire south east asia). It is also claimed that the original statue in the sanctum sanctorum was actually the ashta-bhuja Vishnu (the form of Lord Vishnu with eight arms). This bears great resemblance to the Ashta-bhuja Perumal temple of Kanchi. Other temples and styles of South India also seem to have influenced the construction, sculpture and art-work at the Cambodian temples and other south-east Asian temples in general. 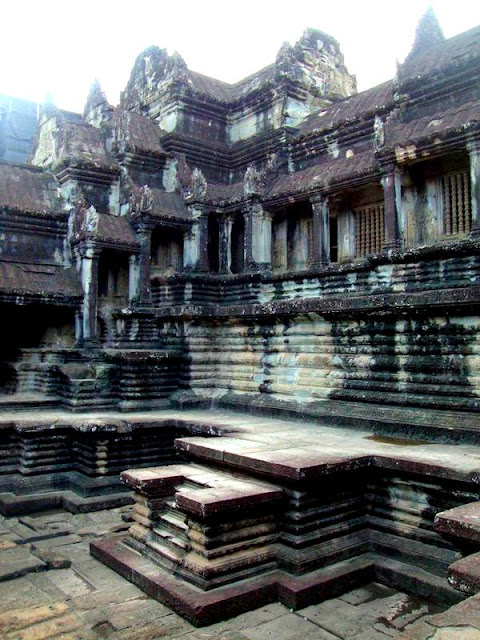 The temple complex in all has a total of 1800 apsaras and none of them are exactly alike. When one explores the northern and eastern side beyond the terraces, one realises that the true magnificence of this construction. There are paths on all sides making the construction symmetric.
After taking in all this, during which the sun had started to shine, we rested a little and clicked some photographs and even after climbing up and down hundreds of steps we were still very fresh and realised that it was just around 7:30 am. Then came to the last but equally striking part of the Angkor Wat- The Bas Relief Galleries.
These Galleries actually span the entire outer corridor of the lower terrace of the main temple complex. The work is so exquisitely done that at most places even the seams of the underlying stone walls are not visible, giving the feel of continuity. What we found most interesting was the Northern Gallery which depicts the battle of Kurukshtra. The Eastern Gallery depicts the famous Sagar Manthan- depictions of which in some form or the other are ubiquitous among the temples here. 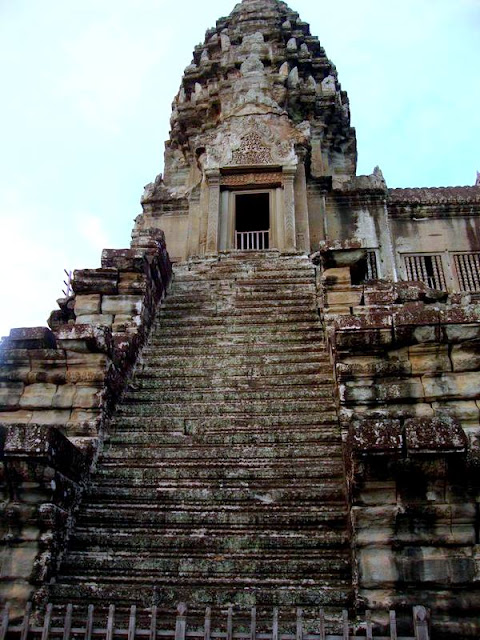 Depending upon one’s engagement level and interest one can keep exploring these temples for hours on end. We spent almost four and a half to five hours here. After this we moved on to the next leg of a very eventful day of some heavy duty sightseeing. The hotel had very kindly packed some breakfast for us and riding the Tuk-tuk in historical and picturesque settings was as good a place as any to have this.
The key takeaway was the feeling of something so great so closely related to the history of our land is not given the kind of prominence it deserves. I will end this by saying that our ancient leaders and their knowledge could influence and manifest such wonders in distant lands is no less than a miracle and a testimony to this great civilisation of ours- a wonder in itself 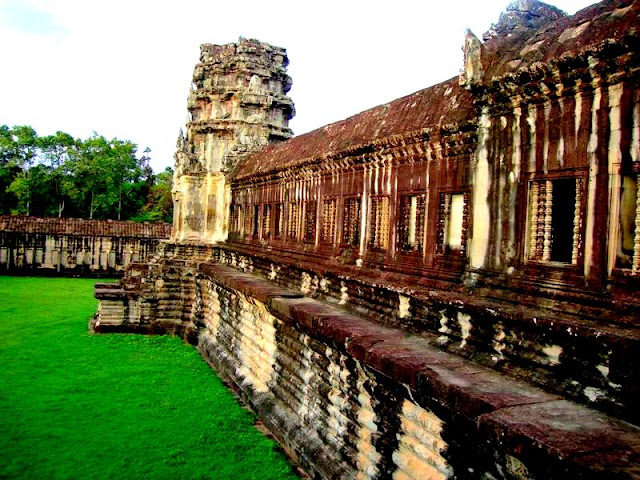