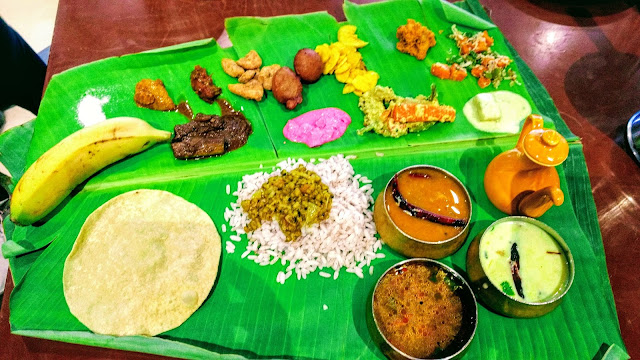 Vishu marks the transit of sun into Aries or Mesha Rasi and heralds the beginning of new year for keralites. The best part about most festivals is the feast and In Kerala, the 1st day of the new year is ushered in with a an elaborate 23 dish meal served on banana leaf. Since it's not possible for most to jet set to kerala for a day, Zambar graciously brings this traditional feast to the millennium city of which  moi got a sneak peek.

Vishu sadya (feast) is a combination of sweet, sour, bitter, and salty that is symbolic of the bittersweet experiences that every year brings in. At Zambar, the feast commenced on a modern note- the rasam was served as a soup. This one lacked the necessary tang and disappointed me but what followed later more than made up for this one minor error. Adhering to the traditions, banana leaves were laid out in front of us instead of fancy crockery. This was heaped with a never ending supply of various dishes from banana crisps, to sweet sarakara vareti, Uniappam,(punchy) inji curry - which I’ll definitely try to make at home and of course an array of vegetables and curries that was served non-stop- literally! It's interesting that every condiment, curry has its one specific place on the leaf. Brown rice though was the star with every accompaniment vying to be combined with it. 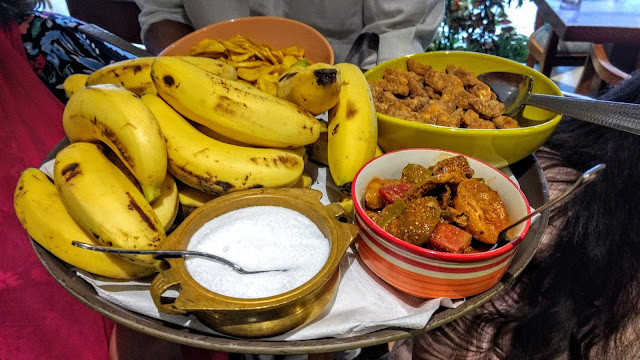 The chef explained the nuances of Malayali cuisine and also taught us how the different dishes are to be combined and eaten- like the banana is mashed into the Payasam. Well it’s actually very logical, that the curd based kaalan and Pachadi is used to balance the spiciness of Black chana with banana.What's interesting is how several  diishes could be made using seasonal vegetables and yet everything had its own distinctive flavour. Dessert followed next and the adaa payasam had me asking for repeats and with this ended our sumptous meal from God's own country.

This elaborate, unlimited thali is available  only on the 14th of April at a very reasonable INR 750++
Where-Zambar, Ambience Mall, Gurgaon.